I’ve bloody enjoyed training this week. Maybe it was the great locations I’ve ran in. Or the people I’ve ran with. Or the weather. Or maybe it’s the fact that I’ve been as busy as shit, so the time out to do training has been a welcome respite and time to clear the head. Yep, that’s probably it. It’s been blissful.

So now, training on a weekly basis looks like this:

The above is the baseline. I still want to do one BMF session a week, some swimming and perhaps some hill reps (more for the variety and change in scenery than anything else). The times are to be increased at my own levels but trying not to increase more than 10% week on week, and also listening to how I’m feeling (I took this to mean if I’m fucking knackered, I can give myself permission to have a slightly easier week rather than ragging myself). Also interspersing long hikes and walks and anything that a) is fun and enjoyable and b) is time on my feet.

So a little different but more focused around heart rate after my session at Sportstest last week. Luckily I’ve also just scored a new sports watch (Suunto Ambit 3 Sport) from Beno who had his eye caught by the new Fenix 5. This is Top News for me in keeping costs down but ending up with a little computer I can chuck on my wrist which will tell me everything I need to know. I’ve only used it once so far but I am SOLD SOLD SOLD. I can see exactly what my heart rate is (which is bloody handy with this new regime) from the heart rate strap you have to wear around your chest. For those not in the know, it’s a stretchy fabric strap with a couple of electrode thingys that you have to wet and then stick around your rib cage. It has to be fairly tight to stay in the right place and accurately pick up your heart rate. First thoughts are that next (and EVERY) time I should anti-chafe stick my chest to avoid painful rubbing on a long run (yes, ouch). This is not the first time I have uttered the words “whoever said running is glamorous was lying”. Although to be honest, I’m not sure anyone has ever said that. Maybe people who don’t run. Today I  picked at a blister that I generally always seem to have on one of my toes (never hurts) to realise it was many layers deep (maybe not a blister then). Either way it was quite satisfying and is probably the start of long distance runners feet battering syndrome. Yes, so glamorous eh? Let’s hope Mike doesn’t read this blog, haha. What a lucky man.

I have realised to keep my heart rate in that 141-151 zone means I have to run at quite a slow pace, which is tricky to get back to (not saying that I was mega fast, but just that my ‘pootling’ run pace was generally faster), but quite welcomed. I walked up the hills and just generally pootled about and enjoyed the running and the scenery without feeling like I’m going to die. Which, believe me, anyone that has ever run has felt like that at least once. If they haven’t, they are LYING and should start running properly immediately.

Tuesday this week saw a forced rest day after I woke up on Monday with a bit of a twinge in my left hip. Walking across the car park at work pulled on it a bit so I figured it probably wasn’t a great idea to go running. Gave me back my evening instead which I spent flapping around at how much I have to do (in the middle of moving house) rather than actually getting on and doing anything productive.

Wednesday saw a 5.40am alarm call for a morning run with Dave D, at a pace I shall now rename ‘chit chat pace’.

Friday morning saw a few miles on the bike helping get my friend Shelley back out on a bike (she’s not been on one for years) and a 15km run up Leckhampton Hill. Refulled like a boss with a Tribe cocoa recovery shake immediately followed by smashed avo and poached eggs on toast later.

Friday evening I headed to BMF run club and we headed up Harp Hill to do various repeats and intervals and dancing around backwards. Mark has the canny ability to make us do horrible things that seem impossible but actually we’re all more than capable, we smash it and end up feeling pretty damn awesome. All the while he’s encouraging without being a shouty dick (most of the time) – a brilliant attribute. He does however have questionable taste in weekend games. 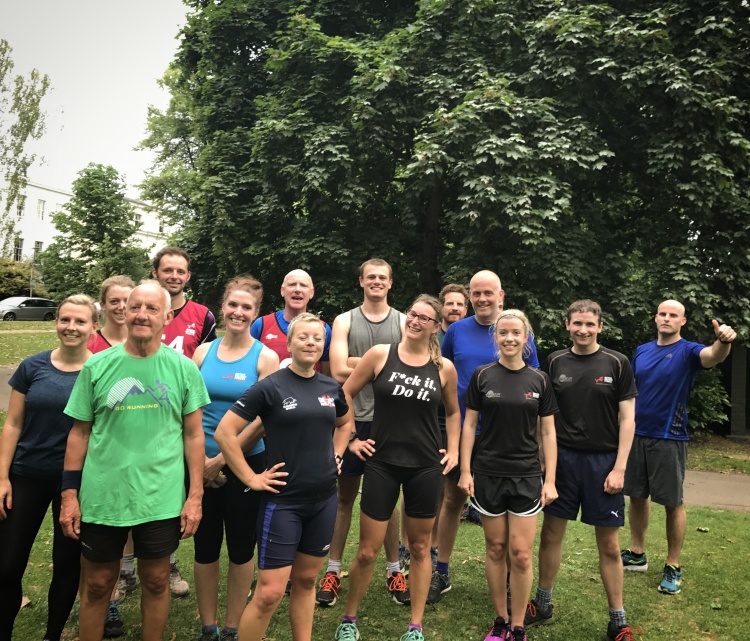 Saturday was a killer form session at BMF. I got the ‘Carl Huxley’ shakes and my legs were pretty much jelly. It’s been a while since that happened. To ease them out me and Nige did a gentle 7.5km walk on Cleeve Hill in the sunshine.

Not surprising then that on Sunday I had the DOMS from hell. Delayed onset muscle soreness. That feeling of stiff pain rendering the affected limbs useless and, in the legs, can lead to a severe case of walking-like-you’ve-shat-yourself-itis. How fun then, that I spent the whole day lugging furniture and boxes around and up and down flights of stairs. Stairs are especially fun with leg DOMS. Luckily my helper Steve also had DOMS from running the Cotswold Way relay on Saturday so we both looked equally twatty walking round B&Q. I had to bail on any kind of running and hope that the stuff I did on Friday & Saturday instead helps towards the training.