This week’s been a blur of squeezing in runs in between packing and moving boxes. So much so that I have to look at photos to remember what I’ve actually done this week.

I had new kit to wear so that was pretty exciting. Yes, I am a kit wanker this week. Shiny new trainers, shorts, Suunto sports watch and a sports bra. Lady runners will understand the excitement of a new sports bra. When the old ones start to fall apart, it all gets a bit bouncy. The clips start to pull off and the elastic is stretched, making every run have that added level of uncertainty that any moment a boob might make a mad dash for freedom and punch you in the face.

New Ron Hill shorts which are little lycra shorts underneath a baggier top short layer. Double shorting but not according to Sue’s rules as they are both part of the same item of clothing meaning if they fall down they’re both coming down. Hopefully there will be no incidents during my runs where my shorts might end up round my ankles.

New trainers too. Two pairs. Such an indulgence! And a necessity, given all the miles I’ll be doing. Bought a pair of Brooks and a pair of Saucony, plan being that whichever seemed to be the best will be the pair I’ll buy another of to wear for the race.

Four people came and joined me on a gentle little jogette on Wednesday morning before work. Well, actually three as James fell asleep in his car waiting for us all to turn up. He did come and join us for a little bit after stalking us in his car.

Friday saw James and I head to the Malvern Hills to play. They looked fabulous on the drive up there, but sadly by the time we got to the top there were no views. Just cloud and rain. Still, not being fair weather runners we got stuck right in and had a lovely pootle about and a good old chit chat. I learnt all about an unfortunate electric fence incident, and we debated whether filling the calorie deficit from running with crap food is a good idea. After such a stressful week it was just what I needed to get outside in the fresh air and stretch my legs. The boxes could wait, the hills could not.

Saturday and Sunday took a different turn, and I swapped the running trainers for bare feet and solid ground for the river. I spent two days on the River Severn with SUP Gloucester paddle boarding, camping, river swimming, campfire cooking and more paddle boarding. A tonic that the [fictional] doctor ordered. You don’t really have much choice apart from to slow down and chill out when a) you’re powering yourself so it’s not in your best interests to go all guns blazing and b) the sun is shining, the river is lapping and the birds are singing. Hell, why would you want to speed that up?

A perfect end to the week. Splendid. 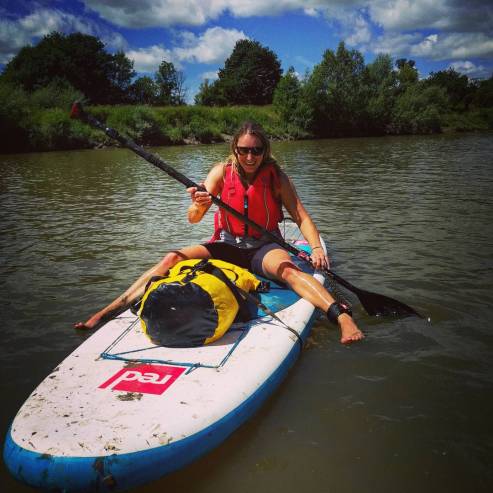 I’m raising money for NMO-UK – you can read more about why and how to get involved here, and donate here.