All of my kit I got some time before the race and made sure I tested it out multiple times on long runs and all-day events to make sure I knew how it would perform. I wouldn’t recommend leaving it until the last minute as you run the risk of having issues during your race.

You can spend as much or as little as you like – I certainly wasn’t decked out in the most advanced gear compared to other people (although I still felt like I spent a fortune!), but it worked well, I was comfortable and it all did the job. Not necessarily the most stylish or co-ordinated but I wasn’t entering a bloody fashion contest.

If you’d like to know more about any of the kit I used, feel free to contact me.

I started off with the 2016 model of Salomon S Lab Adv Skin3 12Set (link is to 2017 model) but ended up with the 2017 model as both zips to the bottom pockets ended up breaking. It can hold 12 litres of stuff in many different pockets and compartments, including 3 litres of water. One litre of which is in two squashy collapsible bottles on the front which feel nice to squidge but also make you look like you are squidging your boobs, FYI.

It’s mega lightweight and REALLY comfortable, and had handy pockets for things like snacks, keys, phone, more snacks, lip balm, more snacks. It also has a whistle which is handy given that one of the mandatory kit list items. I’ve not tried this out in anger though as I didn’t go anywhere remote enough that it wouldn’t scare small children or dogs, and I never needed to use it in the desert.

I’ve fallen in love with these Ron Hill Women’s Stride twin shorts. I bought a pair from Up and Running in Cheltenham and have been wearing them for running ever since (in between washes, obviously). I’ve found them so comfy and easy to run in. No need for extra underwear with these either, commando is the way to go. I took 3 pairs with me for the 5 day race, a bit of a luxury but as we didn’t need to carry all our things I decided it would be quite nice to have a clean(ish) pair for most of the race.

The under layer shorts are long enough to cover the bits of my thighs that touch (yep, no thigh gap here and proud of it), meaning no chafage, and the top layer of shorts look cool (in my opinion) and also feel nice to touch, although be careful of running around stroking your own bottom in public.

I’ve always had Shock Absorber sports bras in the past, but I’m running in Brooks Juno at the moment which I’m pretty impressed with. I’ve got big knockers (running in size 32E right now) so sports bras are probably THE most important piece of kit. Trust me, big boobs + running isn’t pleasant so it’s important to get them locked down.

The Juno has got thick straps which are mega comfy and don’t dig in, and they’re adjustable velcro which means you can get a really good fit. The straps adjust from the front, so you can do this while wearing it, which is a BIG bonus. Anyone who’s had a sports bra knows the pain of adjusting straps when off, trying on, not quite right, take off, adjust again, put back on, try it again…and repeat until you are hot, flustered and fed up.

It’s a bit of a weird design in that there are clasps at the back but the whole thing has to be put on/taken off over your head, and given it’s fairly tight does mean it feels a bit like a challenge trying not to dislocate your own shoulders, however after a few times of using you get used to it and once it’s on it’s one of the most comfortable I’ve worn.

I have had boob rash since using it, but I’ve also been running in warm conditions for long periods of time. I suspect this would happen in any bra (glam side of running). By the time I did the race I knew which parts would rub (the underside of my boobs and the back under the clasp where my backpack would push on it) so I used zinc oxide tape to tape up those areas before starting and also vaseline.

I chose a couple of different t-shirts by Ron Hill; the Everyday and the Momentum. Both were equally as good but really, you can run in anything you like, just try a few out to make sure they are comfortable to wear for long periods of time.

Some people wore compression tops etc – totally personal choice. Again, I took the liberty of having clean kit to put on and so also took a couple of old running t-shirts (Nike and New Balance) which were equally as comfortable. 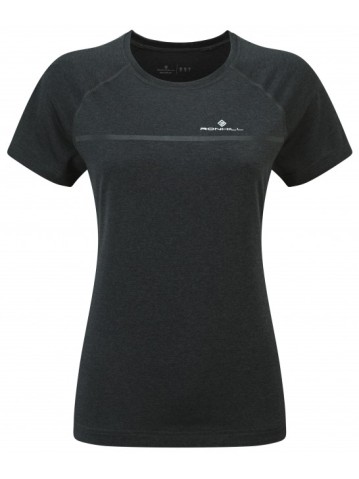 I bought two different pairs of road trainers from Up and Running in Cheltenham to see which performed best to then buy a final pair to use in the race. I used road trainers because of the extra cushioning and the fact I can’t run in neutral trainers so always go and get my gait analysed.

These are brilliant. Trainers that you put on and they feel instantly moulded to your feet. They’ve not got loads of cushioning (well, not as much as my other pair) and so I’m using these for shorter, off road runs that don’t need my trail trainers. <shallow> I also love the retro colours too (I have the purple, black and blue ones) <shallow>

These are more cushioned than the Brooks and so I’m using these on my longer runs that are on harder ground. Seem OK so far. Had a bit of numb foot the first couple of times I wore them, but also have been playing around with how they’re laced up so could have been that. I’ve had Saucony’s before which have suited me well.

I ended up taking the Saucony’s – mainly because they had so much more cushioning than the Brooks. I found with the Brooks I could only run for about 2 hours maximum before my feet started to get a bit achy and sore – not so good for a multi-day ultramarathon! They performed brilliantly – I got a size bigger to allow for hot expanding feet, and the velcro for my gaiters was stitched on (by Cobblers Corner in Cheltenham) with no problems at all. In fact I’d go so far as to say they were beautifully comfortable.

I (and a lot of the other competitors) went for RaidLight desert mini gaiters, bought from the Raidlight website. Did what they said on the tin, no complaints at all. The most important thing it getting the velcro stitched onto your trainers by someone who knows what they are doing – much better than gluing as it can often come off.

I ended up using the Ladies X-Socks Marathon Socks and they were pretty great, although I’m no expert in running socks because I usually just run in what I’ve been able to get cheap as I baulk at paying £15+ for one pair of bloody socks. For this ultramarathon though I’ve figured this is one area I can’t afford to be lackadaisical. 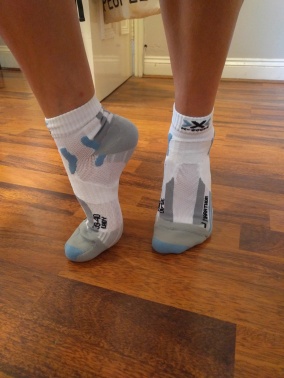 I used one pair for each day – no blisters, no rubbing and they were extremely comfortable. I also got some Injinji liner toe socks (just in case of rubbing I could wear these as well as the X-Socks to reduce the friction so I always carried a pair with me each day in the backpack) and also some Hilly Twin Skin socks just to have a different type of sock if I needed it – but I never needed to use either.

I used 2Toms Blistershield powder in my socks – I’d not heard of or used this product before the ultramarathon so I can’t actually say whether I’d have got blisters without it but I used it every day and didn’t get any blisters at all…so I’m going with the fact it’s got to have helped. 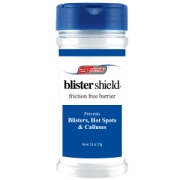 One of the mandatory items was the legionnaires hat which is a cap with the flappy thing to cover your neck. I went for the RaidLight Saharienne from the RaidLight website – the white was my preferred colour but it was out of stock so I ended up with the blue one. Not the best colour as it pretty much clashes with every colour of sports kit you can have but as I wasn’t entering a sports fashion contest I didn’t give two shits, as long as it stopped me from getting heatstroke. The flappy bit is detachable so it can also be worn as just a normal cap, which, given I didn’t have a running cap, is a bonus.

I have the Suunto Ambit 3 Sport. Disclaimer: I bought this second hand off a friend who was selling his, and this is the first sports watch I’ve owned so I have nothing to compare it to.

I’m not going to get techy, as I don’t really know about all the features yet, but I can state I absolutely love it. It’s really easy to use (once you’ve read the menu and had a play) and the heart rate strap is fab as I’m training in heart rate zones and can easily track it on runs. I like being able to see at a glance a) the time b) my heart rate c) the distance d) pace without having to get my phone out and look at an app.

Plus, you can create fun little movies of where you’ve ran and see the route, hills and distance. Bit of a quirky bonus (not sure I’d base a watch purchase just on that).

To be honest, I think any watch with a heart rate strap would do the basics of what I need, it just comes down to how much you spend, and I didn’t have loads of cash to splash.

I used Bodyglide For Her anti-chafe stick. Apparently there are some slightly different ingredients in the women’s (pink) one – not sure exactly what but maybe it’s like chamois cream and more gentle if you want to put it on your delicate womanly areas. Not sure why they have to necessarily use the colour pink but hey, it still did the job.

Quite a handy size and shape to carry around as I did need to reapply on the go with all that sun, heat and sweat; there’s nothing more glamorous than standing at a checkpoint with your hand down your pants rubbing anti-chafe stuff in your bumcrack. Stopped those cheeks rubbing together and chafing though! #winning

You soon get to know in training which parts of your body chafe and rub, that’s why it’s important to train in your kit that you will use.

Note: I have bought all my own kit and haven’t been given anything, so all choices and reviews are personal choice/not influenced in any way