This ultramarathon lark is not just something I can wing this time (believe me, I’ve relied on this as a tried and tested method in the past, with varying success). Nope, I need all the help I can get. So, as part of my ultramarathon training, the other month I took a trip to see Dr Garry Palmer at Sportstest (up near Cannock) for a couple of hours to measure loads of fitness stuff* which would help him come up with advice and guidance on how it’s best for me to train and prepare and a suggested training plan.

Beforehand I’d had to fill in a few forms to give Garry a bit of a background on me: my motivations, my previous race/run times, my strengths and weaknesses etc, and so the session started off with a little chat about what I wanted to get out the session. Garry soon realised that I wasn’t competitive and just wanted to try and finish without dying, which, after telling me he’d be shitting it if he was me, probably came as a relief to him as to figure out how to help me get anywhere near ready.

Chat over, it was time to get wired up and start running. Heartrate strap and other monitors on, the pièce de résistance was to put on a mask which made me look a bit like Bane from the Batman films and run at different speeds for different lengths of time. I have no idea what these were but luckily for me Garry knew what he was doing and just told me what to do and when. I was too busy trying to breathe normally with a massive thing stuck on my face while trying to run normally on a treadmill (I’ve only ever run once before on a treadmill, it’s weird) and hope that I didn’t fall off (because I also couldn’t see much due to the massive thing stuck on my face). Only once did Garry have to tell me to back up a bit before I ran off the front of it. As much as it would have been amusing for him, it probably would have broken his machine. 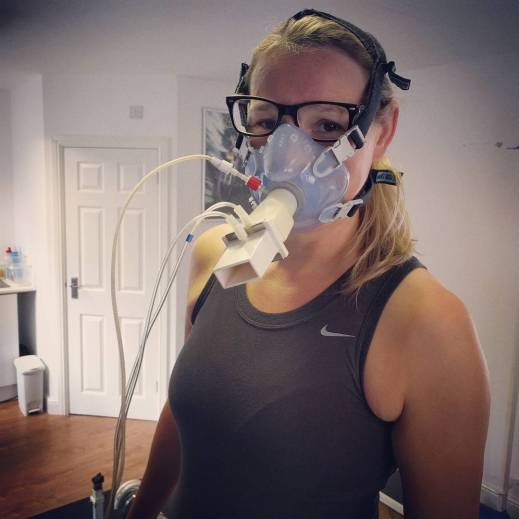 The very last bit is to just keep running, going faster and faster until you can bear it no more. This is psychological as well as physical. How do you know when to stop? We all know the body can go for longer/harder than when the brain automatically clicks in and tries to protect us by wanting to stop. Whatever I did, I did it before my legs turned to jelly and I was still able to jump off and not maim myself in the process. As soon as I stopped, of course I reckoned I could have gone for longer. Garry helpfully said that he reckoned I only had another minute maximum in me and that he had all the data he needed. Maybe he was just being nice but it helped.

While I enjoyed downing a chocolate milk (nice touch), Garry collected all the data and sat down to explain it all. Now, I’m not even going to try and re-explain any of it here but if anyone wants to know, just message me. It’s much easier to talk through in person. What I will say is that it’s FASCINATING. I now know my training heart rate zones, which are not the same as any predicted or standard ones, and at what level I’m in fat burning/anaerobic etc.

All this data meant Garry could advise on an outline training plan – basically all based on heart rate and having a minimum/maximum time to train (rather than set distances). Basically, in my training I’ll be simulating the type of running I’ll be doing in the desert (i.e running slowly, for quite a while) So no sprints etc, unless I want to do that occasionally for fun(!) or a change. He also stressed about listening to my body, and using the times as indicators rather than slogging it out – if I’m tired or under the weather, or just not feeling it, Garry said to rein it back. Which sounds common sense but sometimes hard to do if you’re following a set plan, so it’s good to have the permission .

He also based it on our earlier conversation where we discussed my routines, what I’m interested in, what time I have free etc. To my delight, he added in cycling as part of it – because he knows a) I get bored easily and b) I love cycling. We also talked about time on feet and including hiking/walking as well as running. The whole plan is based around what’s going to work for me, and as I’m not being competitive, means that it’s all about enjoyment rather than a strict, disciplined regime. Which suits me just perfect.

I now know that I’ve got a good level of base fitness – I’d have hoped I would have anyway but it’s good to see the data that backs it up. I have a really good endurance base (which I think Garry was pleased at and at this point said he would be less shitting it now, if he was me) which will bode me well. Probably all that bike riding in Chile earlier this year.

The test also includes some body measurement type stuff, like body fat and the like, and Garry advised that I could afford to lose about 5kg in weight/fat and still remain in the healthy range (I’m already in it) which would all help when lugging my arse across the desert. Basically, it will be 5kg less to carry, and so 5kg less strain on joints etc. It’s not a drastic weight loss and with all the running some of this will probably happen without me having to make a conscious effort, however me stopping/cutting down on eating crap will help (I’ll let you know when I actually start doing it though, I’m still too fond of cake).

All in all, it was, in the words of a Yorkshireman, reet-good-fun. Mega interesting to know how my body is working, how efficient it is and all that jazz, and reassuring to know I’m going to be training in the right way. I want to get to the start line in that desert and feel prepared, like I’ve done as much as I can with the time and resources available to get myself ready. OK, so there’s still work to do with dropping the cake and some boozy nights out, but one thing at a time.

This was a while ago, so I’m now up to all the maximum times when out running,  and now it’s just a case of repeating that every week for the next month and a bit until I start to increase the pace before then dropping down to taper. And you know what? I’m enjoying it [mostly]. I like the fact I’m not always out for hours, although don’t under estimate how long it takes for pre-run getting ready stuff, then the actual running, then the post-run stuff like eating, stretching, showering, more eating etc. I like not feeling completely broken after each run, although I am feeling pretty tired a lot of the time, and it takes a while to make my legs go in a morning (if you see me trying to walk first thing or after sitting down for a while, it’s like a comedy sketch).

It helps I’m bringing people with me on the £2 training plan runs too, gives me motivation to get out there when I’m just not feeling it, and I enjoy chatting to people. Running is the new meeting for coffee.

Verdict? 100% YES to being Bane for a couple of hours. I found it fascinating and I have no doubt that it’s going/gone a long way for my prep.

Visit www.sportstest.co.uk for more information, or call or email Garry on:

Note: I’m lucky that my work paid for this (every year all employees can apply for a small grant to go towards personal learning/development – last year I did a mountain navigation course) but normally it would cost £175. Now that I’ve done it, I’d certainly pay for it myself if I did another event, or had a specific goal in mind. Think of it as an investment in yourself/your health/your training.