I’ve just spent 10 days in silence. Actual silence. No talking, no communicating with anyone. You might find this funny. Or wonder how I did it. You see, I like to talk. I like to chat. I like to ask questions. 10 days is a long time. A really long time. Nearly two weeks. Believe me, I thought all these things and I was a little bit scared about whether I was up to it. But hang on, let’s step back a bit. Because you’re probably wondering why and what for.

When I was in Manali a couple of weeks ago I stumbled upon the website for Tushita Meditation Centre, which advertises Introduction to Buddhism courses. It is just outside Mcleodganj, home to the exiled Tibetan government and Dalai Lama, spiritual leader of Tibet. I knew I was heading this way and it got me interested. I knew I had about two weeks left in India, and was looking at what to do with the time, the next course started in a few days and would fit right in with my dates. It would leave me enough extra time to explore Mcleodganj before heading back to Delhi.

I knew nothing about Buddhism or meditation. I’m slightly ashamed to admit although I had heard of the Dalai Lama I didn’t really know who he was or what he did. I certainly knew nothing about the Chinese occupation of Tibet and the reasons he was in India. I felt very uneducated – how did I get to 32 without knowing about these things? And why? So, I took the plunge and signed up. A few days later I found myself with around 54 other people starting a 10 day course that would be a mix of teachings about Buddhism and meditation sessions, ending with a 2 day meditation retreat. In silence. They stress that a lot. It would be a challenge, but wasn’t that why I came travelling? To learn, to experience new things and give myself a kick up the arse?

I’ve been thinking about what to write in this blog post for a couple of days now. And I’m still no clearer. There’s so much but so little. It was a very personal thing, lots of self reflecting and looking inside, and I’m not sure how much I want to share. But, I want to let you guys know what it was like.

Before all the in-depth stuff, here’s some basics:

So firstly, the Silence. The big Silence. It is mentioned A.Lot on the website, and in the information and in the induction. And rightly so, it is a huge part of the course. It’s designed so you can get the most out of everything, have silence to focus and reflect on what you’re learning and your reactions and thoughts about it. How did I find it? Actually, easier than I thought. When everyone around you is also silent, it is easier. It was easier to not think about how long you had to be silent for though, as it just seemed so long, so I put that out of my mind. I didn’t break the silence, although other people did. Not majorly, just hushed whispers every now and then. But I’m surprised how much this unsettled me; I didn’t like it. It was really disruptive and it’s amazing how a mere whisper can seem like shouting when you’ve been in silence for a while. The only time it got to me was Day 9 at about lunchtime. It was nearly the end of the course, I was ready to talk to people and my brain had just about had enough of thinking. It had reflected all it could reflect, there was nothing but meditation sessions and long breaks and nothing to distract it. I had a bit of a moment where I was just desperate for a distraction; to stop me being aware of my own thoughts and inner monologue. But, it lasted about an hour and then went. But boy, was I pleased to start talking again the next day. I think I talked like a non-stop train as soon as we could. No, I don’t think, I know I did. Sorry to the guys at breakfast, I’m not sure they got a word in. 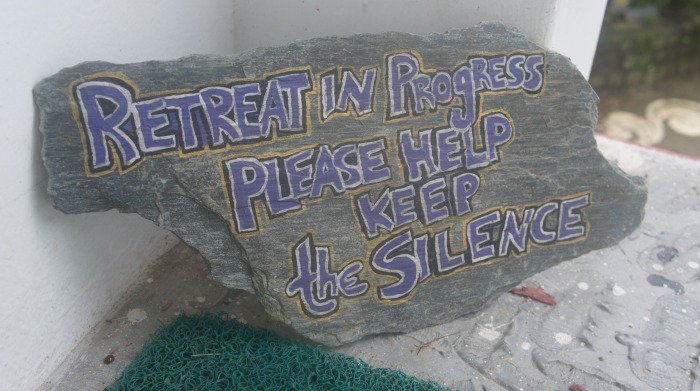 Having to be silent meant I was much more aware of the thoughts in my head. Now, I knew that my brain was often full of things, but, well, let’s just say there’s lots and lots in there. Although, I can definitely tell it’s slowed down now. It doesn’t feel so full or manic, not so much stuff to process or all whizzing round at the same time. No lists of things to do or things to remember. And I think this course has definitely helped with that. It’s slowed my mind down. Organised it a bit. I remember, back in Lincoln at various points over the last 18 months or so, there were many times where I just wanted, no needed, to stop. This overwhelming urge to stop my mind for a bit, just a minute, so I can think clearly, take everything out and sort it all out into some kind of order and put it back in. To look at everything, see the bigger picture and figure out how to do it all. But every time I tried to do it, I couldn’t. My thoughts were so jumbled, that even if I tried, I could never manage it. Other thoughts would take over and I’d just never manage to unscramble it, my concentration would never last and there was always something to distract me. The ultimate procrastinator. Which was frustrating. Never being able to achieve it. Until now. I’ve had that break. Now is that time, that peace and quiet. I feel like I’ve finally stopped and put some thoughts in order. Unjumbled my jumbled mind. And how lovely that feels. I’ve started to think about one thing, and one thing only, at a time. Focus on that one thing. And I know now, that I can put some things to rest. Let them go out of my head once and for all, because they’re organised and sorted now in the right place, with a sense of clarity. Tis’ wonderful.

Meditating was interesting. Actually, really hard work. For all those people who think meditating is relaxing and just closing your eyes, zoning out and going to sleep, think again. We did two types: Stablising and Analysing. Stabilising is where you focus on one thing (the breath) and try to remove any other thoughts out of your mind, and just be completely in the moment. Hmph. Easier said than done. They are always there, these thoughts. It’s really hard to stop them just popping in. And they are so random, mine were a huge mix of things from childhood memories, to people, to things I will be doing, to future plans, to things I remember from dreams and anything in between. Analysing meditation is where you analyse certain questions and topics, guided by the meditation leader. This is more interesting as your subconscious is there to help you figure things out and think of things in a different way. I liked this, it helped with putting a few things to bed for me, once and for all. There was one meditation session that we did where the group chanted a mantra. It was one of the most beautiful things I had heard, and very powerful. I’ll not forget that moment in a hurry.

After one session I felt so completely peaceful and content, it was just blissful. I can’t quite describe it well, but I felt just so, well, happy and calm. Almost a bit like being drugged, or in a trance. I can’t remember exactly what the content of the meditation was (I didn’t write that down), but it doesn’t really matter. What I noted down was that I felt so relaxed and content. Content with my life, with myself, in my choices and who I am. Happy and more understanding of me, and how I live my life and how I will find solutions. Like everything is starting to make sense, and is less chaotic and more ordered.

Starting out on my travels I knew I wanted to spend my time helping people. Not just while travelling, but afterwards, when I have to work. I know I want a job that’s worthwhile, that’s helping, that’s making a difference. This course has really helped reaffirm this. I knew it, but before it almost seemed like empty words. Not saying I wouldn’t, but just not with that 100% knowing with my heart. And that’s what I know now. I feel it. Helping other people is what makes me happy, simple as. It always has, this has just confirmed it.

Has this been a spiritual experience for me? Yes, but not in a religious way as such. It’s been an experience that I’ve felt in my heart and mind, and has left me feeling more content, richer, with a deeper understanding of me and my thoughts. I feel so lucky that I took this opportunity, and I reckon that it’s going to give me a great basis for the rest of my travels in the things that I do and the experiences that I seek and have. I feel I’ve got more of a purpose, I’m not just floating. I don’t just want to visit places and sights to take a picture, to say I’ve been there and move on. That seems terribly self-indulgent. I want to learn about places, speak to people, experience a place and life there. I’m aware of my actions and motivations, and the consequences. Oh, there’s still loads I don’t know, or haven’t figured out, but that’s the fun. That’s what I’ll be doing. I’ll just be a bit better equipped, and on the right path.

There’s a great quote from HH. The Dalai Lama – “Don’t try to use what you’ve learnt from Buddhism to be a Buddhist, use it to become a better whatever-you-are”.

He also said that Buddhism is like training in altruism. I think this sums it up perfectly for me; I don’t want to become a Buddhist. But, through this course, I’ve learnt so much in so many ways, all of which will help me become a better person. One who can give back to other people. A kinder person, a more generous person. A person who will spend more time thinking of others. Because, the Buddhists are right, that is what makes someone truly happy. 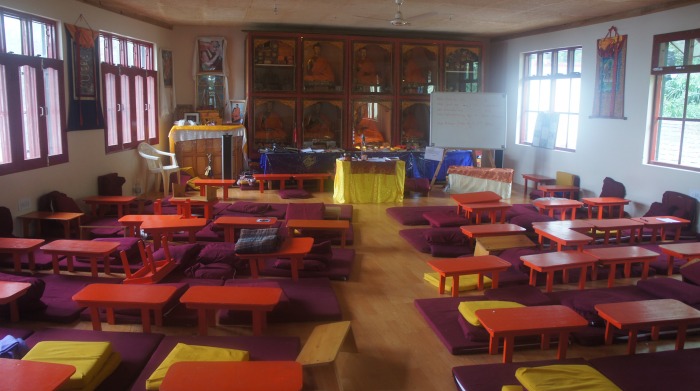