Having been here for a while now, and having to eat to, you know, survive, means I’ve been getting familiar with NZ food stuff. It’s not majorly different to the UK in terms of general cuisine, but there’s a few things that are ‘traditionally kiwi’:

Chips and hot chips – chips are crisps, hot chips are chips. Like in the UK, fish & chips are popular here, but note they’re not called fish and hot chips. Who only knows why. I can assure you however that the chips with fish are hot. Unless you don’t eat them straightaway.

Pies – my god they love their pies here. So many different types of pie you can get, ideal roadie food. A staple flavour is mince & cheese, which I’ve not tried, because. errr…MINCE AND CHEESE? Weird.

Peanut slab – Whittakers chocolate filled with peanuts. A good choice for tramping, unless it’s the middle of summer when you just end up with a bag of peanuts swimming in molten chocolate. Tasty but messy.

Kiwi dip – OK this one is Weird with a capital W. BUT. Oh so good. Ask anyone here. A tin of Nestle reduced cream mixed with Maggi onion soup powder mix. Yep, you read that right. Cream and a soup powder mix (kinda like a cup a soup). Sounds DISGUSTING eh?. Tastes AMAZING though. It’s such a kiwi staple they are always on sale together at the supermarket, and you can buy special kiwi dip bowls. I actually have some in my fridge right now. That’s what you get for going to the supermarket when hungry. I do not need to sit and basically eat a tin of cream. 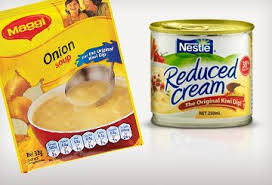 Onion soup powder isn’t just used in kiwi dip, or indeed for actual onion soup (I do wonder how often it’s actually used for it’s intended purpose), but also in some other dishes, like savoury mince (mince with celery and other assorted stuff, often served on toast – I personally like it on [hot] chips)

Chocolate fish – another chocolate-covered fruity item, this time strawberry marshmallow stuff in the shape of a fish. Often used in the context of giving one to someone who’s cocked something up. A confectionary wooden spoon, if you will.

Jaffas – no, not Jaffa cakes, but small orange-chocolate ball things. They roll well apparently and get thrown at people/things. Hooligan behaviour if you ask me.

Hokey pokey – the inside bit of a crunchie, broken into pieces and put into other things. Ice cream, chocolate, fudge, cake. Not to be confused with the Hokey Cokey, I don’t think that’s a thing here and you’d get looked at very strangely if you started singing about putting body parts in and out and shaking them all about.

Cheese rolls – slices of white bread slathered with some kind of magical cheesy mixture (I have a feeling onion soup powder may be involved), rolled up and grilled.

Mousetraps – the same family as cheese rolls, I’m not sure exactly what’s involved in mousetraps (and yes, I could Google but I’m not going to) but it’s like a mouth explosion of flavours. There’s definitely cheese and bacon. Maybe some kind of onion. Maybe it’s onion soup powder again, HA. All the mixture is piled on top of bread/toast and grilled, and ee-by-gum it’s good.

Cookie Time cookies – do not eat these cold; they taste shit. But put them in the microwave for a few seconds and – wallah – they are soft, gooey cookies that taste like they’re just out the oven.

Pavlova – THE most popular kiwi dessert by a long way, especially in summer. Christmas pudding? NO. It’s always Pav. Christmas is in the middle of summer of course, but I’m not sure exactly what the obsession with pav is.