I first met James through Tinder, when I was researching for my Tinder Trouble post on my old blog. I was looking to make friends as I was new to Cheltenham, he looked sporty and was into running so we’d got chatting. I’d told him early on that I wasn’t looking to date anyone (yeah I know, why were you on Tinder then? Read the article link above and it will tell you) so our first meeting (not a date) was a cup of tea in Moka at 9am on a Bank Holiday Monday morning.

We’d already chatted a bit over messages before meeting as I’d been away working up in Aberdeen. It’d been my birthday and he’d sung happy birthday into a voice message for me. Given we’d never met I’d swung between wondering whether it was sweet or a bit creepy. I settled on sweet but decided to reserve final judgement until we’d met. I kept the recording just in case he turned out to be an axe murderer and the Police found my phone somewhere.

I can’t really remember much about that first meeting now; I think we mainly talked about running, probably as a safe, shared common interest topic to avoid any awkward silences or murderous thoughts. To my surprise (and relief) he turned out to be pleasantly interesting, seemed to know everyone in Cheltenham (always handy and a good sign) and liked tea so I was happy to meet again. So we did. I can’t remember how our friendship progressed really, but that’s a good thing; it means it was pretty organic.

We found we had loads in common, and hung out sporadically depending on when we were both free. We drank lots of tea, ate cake, played squash, hiked, walked and ran our way round Wales and the Cotswolds and, less occasionally, drank beer.

Our beer nights out were actually few and far between, and generally impromptu as together we’d seemed to prefer sober activities for some reason. Random nights out that would usually start as just a quick drink when JC was already out and I was passing by. Over the course of these, I met (and got drunk with) a few of his friends, one or more of his sister(s), and even met his Nan, when I had to try Very Hard to appear sober when we stopped at her house in between pubs.

I loved our chats; we delved deeper than just chit-chat about running, and would talk about life, hopes, dreams and passions. He ‘got’ me in a lifestyle and attitude sense, and I’d know and be able to rely on him for bouncing ideas off, knowing that he’d throw suggestions my way without judgement.

James is one of life’s “nice guys”, and I don’t mean that in the shit way that people say if they don’t have anything better or more descriptive to say. He does so much for other people, is generous with his time, energy and cash, without any expectation of anything in return. From the outside, it’s so easy to see where his passions, strengths and skills lie.

Getting him to see this is a different matter though, and last year it was heartbreaking to watch his spirit get slowly crushed by a situation outside of his control, despite much effort on his part. It’s really hard to stand by and watch a friend go through a tough time, and feel helpless, when all you want to do is wave a magic wand and make it all better for them.

What I’ve never said to him, either at the time or now (when thankfully he’s out the shit), is how much I admired the way he managed his way through it. He’s stronger than he realises, asked for help when he needed it and, probably unknowingly, set an example to many people by what he shared on social media and in person. His honesty is raw, refreshing and an inspiration for many.

I am so unbelievably chuffed for where he is now, and where he’s heading, and I can’t wait to cheer him on from the sidelines with my cheerleading pom poms. The world is his oyster, and my world is much greater for having him in it.

Negatives?  He hates selfies and reacts badly to horsefly bites. 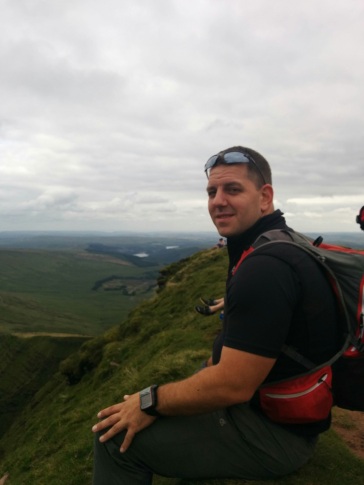