So talking of great bosses, let me introduce Matt. One of my favourite managers (and good friend) who did more for me than he’ll ever realise at one of the most tumultuous times in my life, which I’ll never forget.

The year was 2011, the month was September. I’d just told my husband I wanted to separate. He didn’t take it too well, and 3 months of limbo-hell followed while we still lived in the same house trying to figure out how to deal with the end of our marriage, split the assets and move on. (Note: I do NOT recommend this)

I can’t remember how or when I told Matt what was going on but right from the start he was A-mazing with a big fat capital A. He became my confidante at work, someone to talk to about what was going on. It was such a rollercoaster time, I never knew what I was going home to each day and Matt was one of the reasons I managed to keep it all together at work (Just. He might disagree!). He’d make sure I was OK and listened when I needed to talk, be OK with me disappearing off to solicitors appointments at short notice and be privvy to details of my personal life he’d not neccessarily have asked about (sharing is caring).

He’d take me out for a beer at lunchtime, never letting me buy one. In fact, I think I’ve only ever bought him two beers in the entire time I’ve known him. Although he drew the line at me suggesting a Monday lunchtime beer club, citing it was too early in the week; Wednesday onwards, however, is acceptable.

Once the rollercoaster of those 3 months was over, Matt had to then deal with newly-single Tara who was attacking life alone with great gusto. I got given a bit of slack that year, with a couple of “WTF Tara? Really?” ” Yes Matt, let’s never speak of this again” moments, and that one time where I may have been a little merry still, one Friday morning, and I forgot the key to my locker where my laptop was. Matt sat me down in the corner, sorted the spare computer out, brought me some water and told me I was OK not to speak to anyone for a little while. I’m happy to say that was a one off and life has calmed down a bit now, but Matt is still as patient and kind as he ever was.

I still remember his face when I told him I was leaving, and how sad I felt doing it. We laughed a lot in our team, and my life had changed so much during that time. But he understood, even when I turned down the option of keeping my job open. Over the years since, whenever I went to Lincoln I’d drop in and see him, and we’d catch up, my beers turning into cups of tea and our long lunches cut shorter with his relentless meeting schedule. Matt’s often told me he’s hoped there was a fit outdoorsy runner out there somewhere for me and had high hopes with my move to New Zealand but I think he’s probably given up on that now.

Even though I’ve not worked with him since 2013, he’s still part of my life, and we catch up electronically these days. When I was back in the UK last year he was one of the first people I had a beer with, and will be whenever I next head back. And every 1st Dec, I still message him asking for a picture of the little tree with the big balls which signals the start of Christmas. 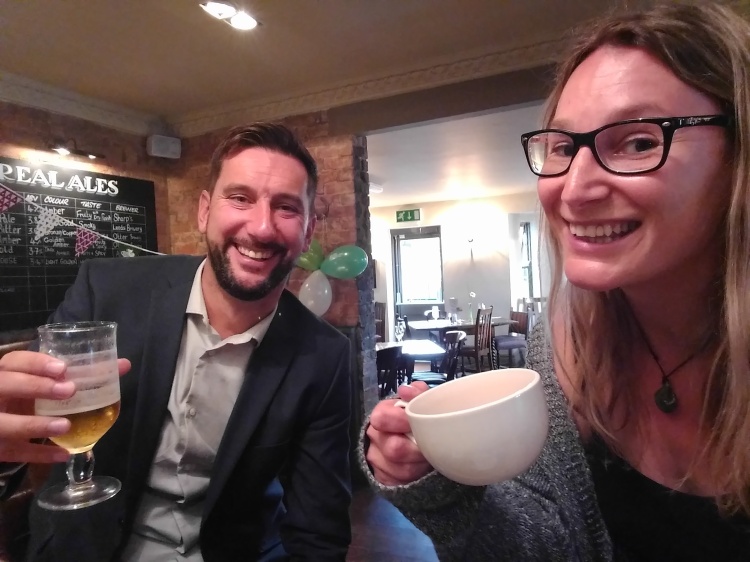