It was the first day of secondary school, and I looked around the room to see if I recognised anyone in my class who went on the same school bus as me. Mainly to have someone else to help with figuring out how the whole bus thing worked.

As an 11 year old who was used to either biking or being picked up from a tiny rural school, I found the whole bus thing real stressful in the first year or so when I started big school. You had to firstly know which one was yours – there were two by PC Coaches (the bus company) and neither had any signage as to which one they were. All the buses lined up in a row, and never in the same order – so the bus could be at the front, or at the back. You had to run up and down the line, find a PC coaches one and then look in the windows to have a look at who else was on there [they picked up another secondary school first] and see if you recognised anyone else. If not, you had to run to the other PC coaches one and repeat.

All of this in a very short space of time – the buses would only wait for around 5 minutes after the last bell rang, and then start moving. Sometimes our last class would be the opposite side of the school, or sometimes teachers would be a little late at letting us go after the bell, and so sometimes it would be a mad sprint (literally) around to the front of the school. Having someone else to share the stress and the sprint was invaluable, and Dylan was that person. I’ll always remember us running at full pelt, school bags and folders flying, at least once a week through/around the school when we had our last lesson over in the English block. I was so jealous of my friends that got to walk to school and got to nonchalantly pack their stuff up and stroll casually out, avoiding this daily stress.

I think I only missed it once (maybe twice) which I reckon is pretty good going, and it was probably when Dyl wasn’t at school.  I’m sure not whether he ever missed it. Whether he felt the same stress of the bus ritual, I’m not sure. We weren’t in all the same classes after the third year, but by then I’d got used to the whole thing and I was a bit more relaxed about it all.

We didn’t really hang around with each other in school so much as we had separate friendship groups, but we were pals on the bus and would chat and laugh together. He was always drawing something, and was pretty damn good at it. I drew stickmen and did my homework that I’d forgotten the night before.

The whole class would piss around in the form room at registration/breaks/any time we could get in there, and in the second year our form room was Room 15, a portacabin in a corner of the car park away from the school, which was great as we could get as rowdy as we liked before Mr Rowe came in. This was everyone’s favourite form room I think, and I can remember many fun times here; seeing if Vicki could fit in a locker (she could), spin the bottle in the cupboard, playing SLAM!, collecting chocolate boxes (no idea why), reading More magazine with it’s position of the week and discussing if sex meant being a contortionist, having a different crush on boys each week etc..

One time, we were all pissing around as usual and Dylan was the other side of the main door or one of the windows (I can’t actually remember which, or the circumstances that led to it) and for some reason (again, can’t remember why) I slammed the door/window.

With his fingers in it.

Unsurprisingly, he screamed out in pain. I was mortified; I hadn’t meant to hurt him. I’m sure I didn’t know his hand was there. I remember apologising over and over again, hoping he wasn’t too injured but mainly hoping I didn’t get into trouble as it was only a few minutes before our teacher was due to arrive. I pleaded with him not to tell Mr Rowe, which thankfully he didn’t, although I’m not sure whether he was being nice or whether he was just in too much pain to do anything. I’ve never forgotten this, and I still feel bad to this day.

He never seemed to hold it against me though (although was probably wary about being near a door/window at the same time as me for sometime after), and we remained friends throughout school, which I was glad of. Like most school friendships, we lost touch when we left, even though both of us stayed living in Lincolnshire. I think we bumped into each other once or twice in the Black Swan over the years, but thanks to Facebook, we got properly back in touch around 10 years ago now, and I’m really appreciative to have access to the social media window of his life.

I’m chuffed he’s still drawing, and really doesn’t seem that different to the Dylan I knew at school. Fun and kind and still into sci-fi, fighting games and other geeky stuff. He never tied to fit into any mold, or crowd, and always just seemed to be real confident in who he was.

He also looks like he hasn’t aged in the last 20-odd years. Bastard. 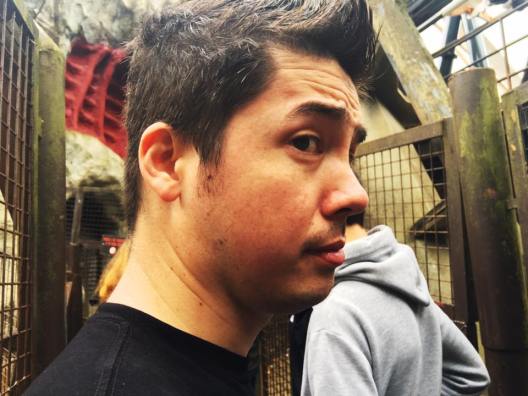