It’s like the end of an era. A friend said, “it feels a bit sad almost, like it’s the end to an exceptional time.”

We went into the heavily restricted Level 4 lockdown when there were only a few cases in New Zealand and no deaths. Compared to the rest of the world it was quick and forceful, or to quote Jacinda Ardern, “go hard, and go early”.

5 weeks of staying at home as much as possible, no travel (not even across town), not allowed to meet anyone, everything shut, no takeaways, no online shopping. Pretty much nothing; most of the country at a complete standstill.

It was weird. The city was quiet; the streets empty. It didn’t feel eerie, as some photos and films would have you believe, but it was strange. For some, it was a reminder of the time following the earthquake in 2011.

We then moved from Level 4 (total lockdown) to Level 3 (heavily restricted) a couple of weeks ago. Socially, there wasn’t much different between the levels;  but Level 3 opened the economy up a little more by allowing some businesses to reopen and we got online shopping and takeaway food back, amongst other things.

It didn’t really feel too different, although it was ABSOLUTE HEAVEN to be able to go to the beach 15 minutes away and have a pizza takeaway.

We’re due to move to Level 2 tomorrow, which takes us much closer to normal life than we’ve had for nearly two months. We can see people outside our bubble again, shops, restaurants and pubs are reopening and we can travel around the whole country. Obviously there’s a lot of changes, and it’ll still be far from ‘normal’, but it’s a step in the right direction.

But it’s also a change from what’s become the cushion of lockdown, hence my friend’s comments about feeling sad. We’d got used to the empty streets, the new way of life, the uniqueness and the bubble. I’ve spent weeks enjoying more time to myself, a new way of working, pottering around and I’ve got used to it.

At the very start of lockdown I was diagnosed with degenerative arthritis in my shoulder, which I’m in slight denial about (despite the constant pain), lockdown allowing for a suspension of reality. Because of lockdown I can’t do some of the normal things that I have to face I might never be able to do again, and so I haven’t had to deal with it. I’m not sure I want to yet.

Me and The Poet have been dating with a difference throughout all this, quite early on in our relationship. Due to NZ’s rules we’ve been able to spend [likely more than normal] time together (without having to live in the same place), and we’ve got to know each other through the simple things like a walk in the park. It’s been different, but special, and Level 2 will change that dynamic.

Of course, there’s the chance NZ could move back up to Level 3 and even Level 4, but I’m pretty sure the whole country doesn’t want that and will work their hardest to make sure that doesn’t happen. New Zealand went hard and early, and it’s put us in great stead to control the virus and keep deaths to a minimum.

Everyone recognises this as an exceptionally unique time where we’re living history in the making, and it’ll likely be talked about for the rest of time. For us here in New Zealand we’re moving on to the next stage, with a tinge of sadness for the end of what’s been and will hopefully never be again, and ready for the next change we need to adapt to, whatever that looks like. 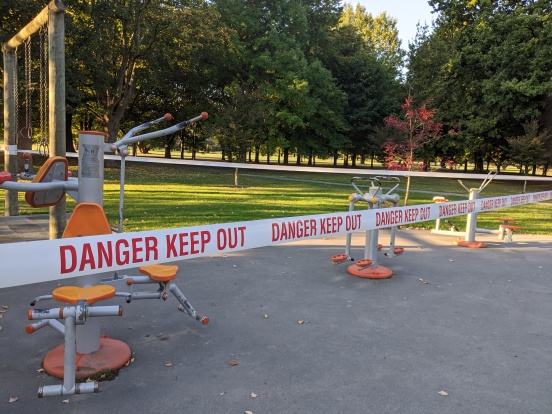